A great show in race 2 at Spa-Francorchamps: Antonelli again, then Dunne and Bedrin

A great show in race 2 at Spa-Francorchamps: Antonelli again, then Dunne and Bedrin

The second race of the Italian F.4 is full of tussles and twists

A very lively race this morning at Spa-Francorchamps, race 2 of the third round of the Italian F.4 Championship certified by FIA. Many battles on track, with four Prema Racing drivers at the start in the first two rows. The arrival order then sees Andrea Kimi Antonelli pass under the chequered flag first, followed by the Irishman of US Racing, Alexander Dunne and Nikita Bedrin, PHM Racing, third.
The race
It was a difficult race right from the beginning, with Antonelli getting off to a good start, followed by Rafael Camara and James Wharton, the Prema Racing trio who had already obtained the honours in race 1 yesterday. After a few corners there were problems instead for their teammate, Conrad Laursen, who is involved in an impact with the Tatuus of Nikhil Bohra (US Racing). Race over for the Dane who, in race 2, started from the fourth block of the grid. Alexander Dunne got off to an excellent start, taking off from the third row and immediately behind the leading trio, in an attacking race, determined to make up for the points lost after having slipped back in the first race standings, following the penalty he received for yesterdays battle with Conrad Laursen.
Brazilian driver Camara took the lead of the race by successfully attacking Antonelli at the Les Combes turn, while behind started the tussle between Charlie Wurz, Prema Racing, and Martinus Stenshorne, revelation of the Van Amersfoort Racing team. The Austrian gained P10 over the young Norwegian driver. Just ahead another tussle, this time between Dunne, who has passed into P6 and has to battle with Bohra and Bedrin. It was precisely the PHM Racing driver, in P4, who was able to attack the leading trio and jumped into Wharton's tow to shorten the distance, then managed to pass the Australian.

Very fierce contender, just behind, Ivan Domingues, Portuguese of Iron Lynx, fighting in the top 10 in a very compact group, with Marcus Amand (US Racing) to gain positions.
Trouble in the tail of the race for Italian driver Valerio Rinicella (AKM Motorsport), who ran off the track in the scuffle with Jonas Ried (PHM Racing), who ended up out of the track and was forced to retire with the front left suspension damaged following a collision between the two cars. Trouble also for Cram Motorsport, between 2 teammates: Nicholas Monteiro, making his Italian F.4 debut, colliding with Ricardo Escotto.
Antonelli attempted to attack, very fast at the exit of Eau Rouge, Camara managed at first to resist, then had to surrender the lead to his teammate, with Bedrin who, in turn, seized the opportunity and started to attack the Brazilian. 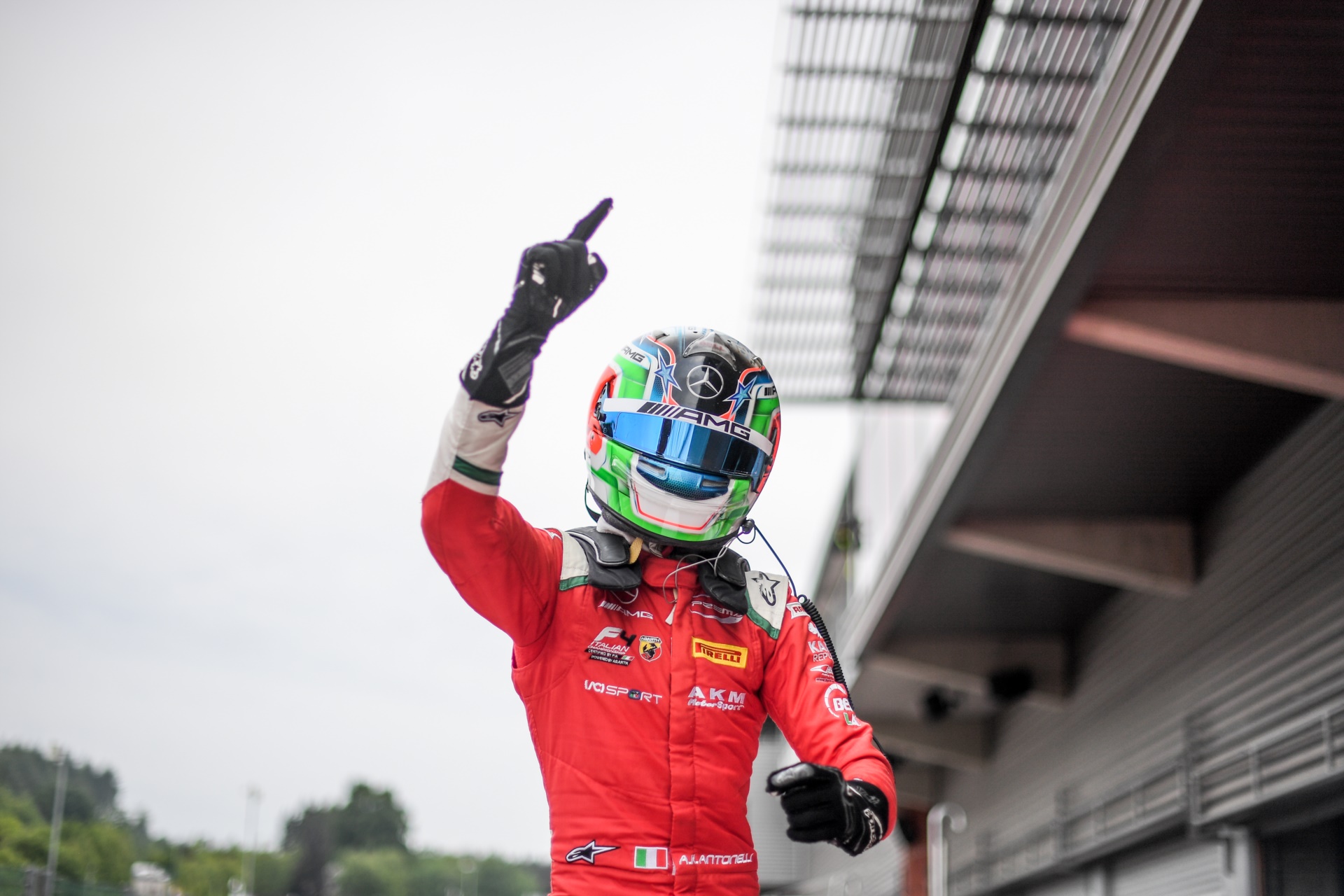 Dunne then gained P3 by attacking Bedrin, who ended up off the kerb on the approach to Bruxelles turn, and rejoined behind Wharton, in P5. Camara retook P1 on Antonelli, who was forced to lift the foot from the pedal after cutting into a corner. The Bolognese driver then launched himself into pursuit and again managed to overtake the Brazilian, despite tough resistance. Camara in fact forced him to the outside (receiving a caution black and white flag), but Antonelli had the better pace and managed to close in on the overtaking move. Just behind, it was Marcus Amand who put on a show with a fine overtaking move on Nikhil Bohra in a struggle within the US Racing team. But the battle for the top positions was still alive on the ups and downs of the Ardennes Rollercoaster, with Alex Dunne in the front, managing to slip through and get P2, then launching attacks on the outside on the leader. Dunne also signed the fastest lap of the race with 2'23.144.
Bedrin gained the position on Wharton, in P4, then attacked and touched Camara's Tatuus. The Brazilian's car rears up and then passes into P4, with Bedrin in fifth, before the finalization of the climb that brought him back on the podium.

Once again an excellent performance by Maya Weug (Iron Dames), first involved in the tussle with Barnard in order to entry into the points zone, from which she emerged victorious by tucking in behind Domingues and eventually finishing in P10 behind Marcus Amand. Amand ended the race losing positions, because of his understeer problems, caused by a collision in the fight with Wharton. Damages to the front wing of his car cost him many positions, with the Franco-Finnish driver forced to slow down to complete the race.
In the closing stages, Alfio Spina (BWR Motorsport) collided at Les Combes with Taylor Barnard (PHM Racing), resulting in a double retirement that caused the safety car to enter the track with about 1 minute + 1 lap to go. The race ended with the safety car procedure.
Race 1 provisional standings: 1.Antonelli; 2. Dunne; 3. Bedrin; 4. Camara; 5. Wharton; 6. Bohra; 7. Wurz; 8. Domingues; 9. Amand; 10. Weug.
Now only the grand finale is missing to conclude the first foreign weekend of the Italian F.4 Championship certified by FIA, with race 3 starting at 17.25. The last race of the Belgian weekend at Spa-Francorchamps will be broadcast live on television on ACI Sport TV and in live streaming on the Facebook and Youtube pages of the Italian F.4 Championship.